Currently, Paulino is not only one of the most consolidated guitar artisans in our country, but also one of the  most renowned luthiers internationally.

His guitars are almost cult instruments worldwide. In some countries, they are so highly appreciated that the  arrival of each new instrument implies a big event, and their sale is sometimes carried out through heated  biddings

Son of the great guitar maker Bernabe, who got to be the head of Ramírez workshop before becoming  independent; from an early age he had the privilege to learn from his father, an outstanding artisan to whom  his self-demanding nature constantly urged him to build "the great guitar".

The strong perfectionism of his father, his deep knowledge and unbounded love for his job, which he  considered an art, were passed on to Paulino, who soon left his studies to focus on what he liked the most:  learning and building guitars together with his father and teacher.

After many years of intensive collaboration, Paulino has achieved not only to continue his father's line of  work, but also to raise quality, sound and innovation up to virtually unbeatable levels.

Having the same research interest as his father, Paulino has developed his own building methods. His guitars are typical for their bright and  strong tiples, and for their surrounding, deep bass notes; guitars that are full of strength and offer an exceptional sound projection.

This resulting sound is highly influenced by the top-quality woods he uses, - all of them from his private warehouse and subjected to a controlled  ageing process of many years - and also by his multi-stem building system, which manages to combine power and sweetness in such a way that  his instruments are unmistakeable, not only for the beauty of their finishings but also for their sound character.

His challenge - taking over where his father left off- still consists in building the "great guitar", the dream instrument. All guitarists have much to  thank to this endeavour, because in the meantime he manages to provide us with instruments of impeccable workmanship, whose sound touches  our very soul. 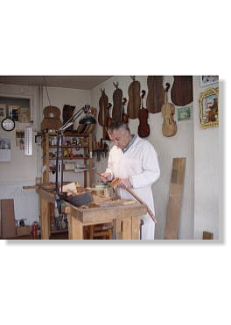 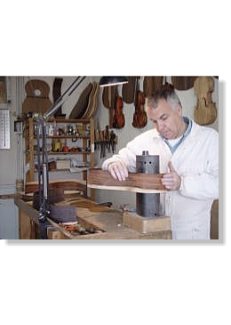 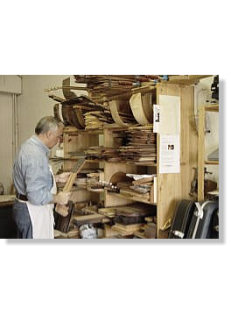