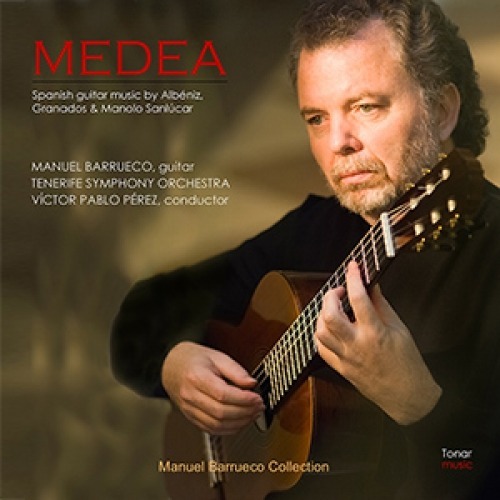 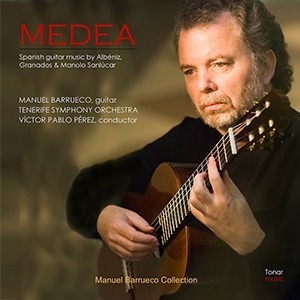 Guitar solos by Albeniz and Turina

Spanish guitar solos by Albéniz and Granaods; concerto for guitar and orchestra by Manolo Sanlúcar

“MEDEA – Spanish guitar music by Albéniz, Granados and Manolo Sanlúcar” features Manuel Barrueco performing solo Spanish guitar music by Albéniz and Granados, and the evocative “Medea” by flamenco composer Manolo Sanlúcar, one of the key figures in the evolution of the flamenco guitar. Medea is performed with the Tenerife Symphony Orchestra and Spain’s most prominent conductor, Víctor Pablo Pérez.

Barrueco arranged a concerto-length suite from the hour-long ballet Medeafor the classical guitar, with the blessing of the composer. The hauntingly beautiful melodies leave no-one untouched! Originally conceived for two guitars and orchestra, Barrueco made the one-guitar arrangement presented here. Says Barrueco:

As I was learning Medea, I found that to play it in a strictly classical style did not quite convincingly project the emotional content of the music. I found that a little more of a flamenco touch not only sounded better, but that it was indeed necessary. I finally arrived at a style of playing that to my ears sounded something like “flamenco dressed in tails”.